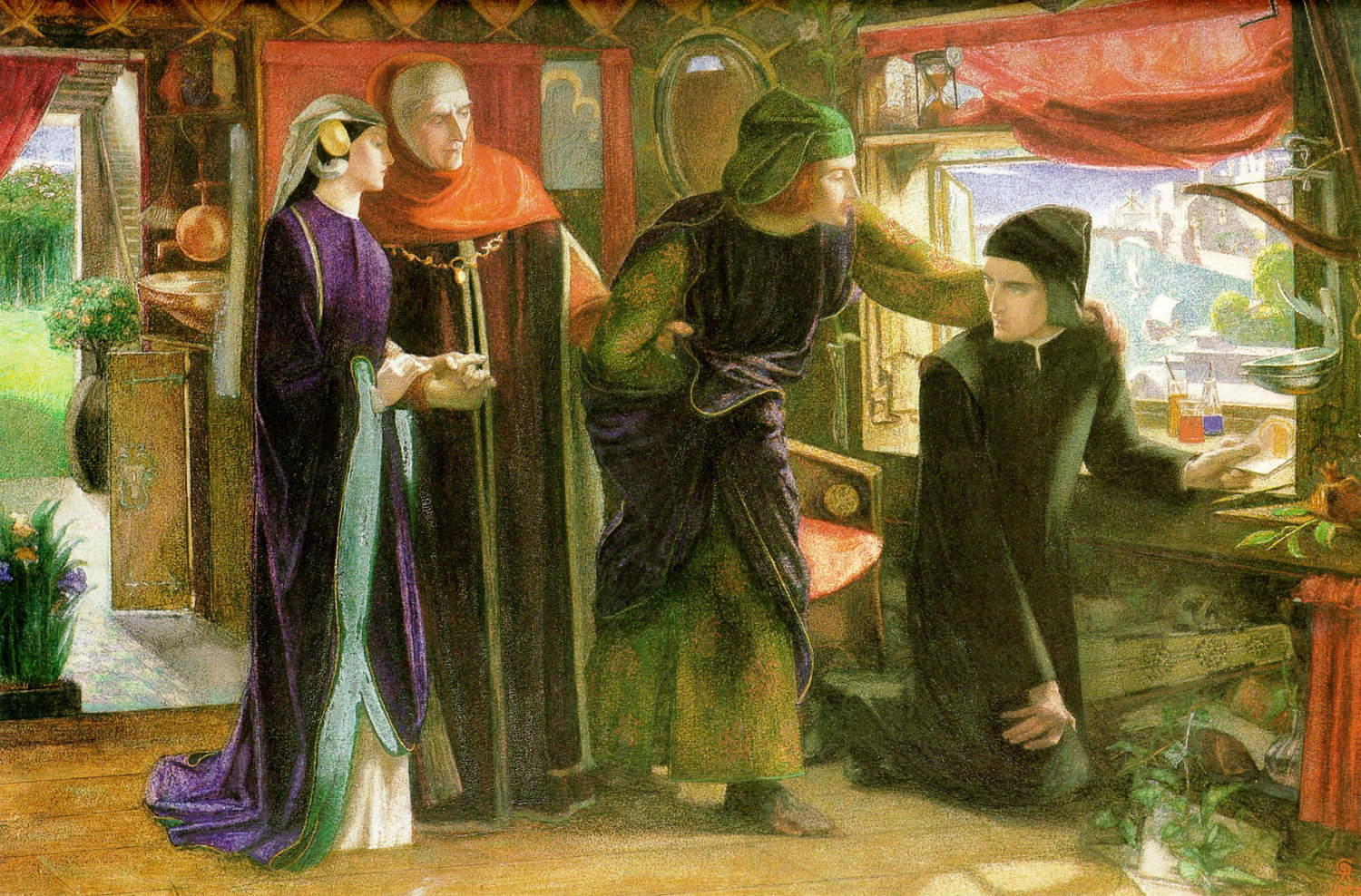 I have been teaching a number of watercolor classes recently and seek to give my students, many of whom are just beginning, a taste of the richness, depth and breadth of watercolor as a medium.

It is with this in mind that I return to one of my favorite watercolor paintings of all time, Dante Gabriel Rossetti’s ‘Dante Drawing an Angel on the Anniversary of Beatrice’s Death’. I have been trying to figure out what it is I love so much about this work and why, although my style and taste have changed dramatically. I return to it time and again as it never fails to delight me.

I don’t remember when I first encountered this work in a book, but it must have been at least fifteen years ago. I do however remember seeing

this work in person quite clearly at ‘The Pre-Raphaelites and Italy’ exhibition at the Ashmolean in 2010. I recall being very excited that I would get to see some of Rossetti’s watercolors in person, this painting in particular. It glowed, it sparkled, it did not disappoint. I felt calm in its presence, enchanted.

Watercolors are generally not exhibited for long periods of time because of the potential for fading due to the delicate nature of the pigments, especially those with age. Fortunately, pigments are becoming more and more lightfast/ permanent and UV glass is available. It just so happens that this exhibition was the first time this work had been shown in 50 years! I felt quite lucky to have seen it. It seemed as bright and vibrant as it must have been the day it was painted.

When I look at ‘Dante Drawing an Angel…” I am always struck first by the color, the stunning jewel tones, the incredible richness and the depth. If you gaze at the piece for long enough you begin to see how complex the color is, created by layer after layer of transparent and semi-transparent pigments. The purple, truly a royal color, almost makes me swoon, so rich, inviting, it strikes something in my core. But then my eye moves to the red… sigh and the blue-violet of the sky in the distance, but then there is the green… the viridian, the one we are told not to use out of the tube in art school because it is a garish, an almost unnatural green… Rossetti gives it believability! His colors, in my opinion, are in perfect balance. My eye dances from one to another, they play off one another, carrying me through the composition.

The gloomy interior, invites the eye into all its nooks and crannies with warm, rich tones. I feel as though I see something different each time I view the painting. There are many curious places for the eye to rest in its journey across the page. The copper sink, the carved figures in the ceiling, the crest, the partly shrouded altar piece, the reflection and reflected light in the mirror, the bottles on the windowsill, the delicate hourglass and finally the skull peeking out from beneath the sill. Additionally, Rossetti leaves us with access to the garden door, so we might find a brief respite from the weight of Dante’s grief. Light pours into the gloomy interior, the ladder in the background has a gorgeous beam of light, an example of a lift (a subtractive manner of working, removal of color in watercolor).

I am also drawn to the way in which the figures are posed and their sharp, yet softly painted features. Rossetti paints the picture of grief upon Dante’s face, his face pale and slightly drawn, his jaw slack. The concern upon the face of his friend is clear. Perhaps his future bride wears a look of resignation upon her face because she cannot hope to compete with the idealization and adulation of a dead woman.

But why else do I love this piece? I have always found kinship in Rossetti’s work. His paintings are beautiful, soft, mysterious, dreamlike, melancholic, dramatic in subject, and in color. They are dark paintings in general, works of obsession, longing, and sadness but most of all works of loneliness. He paints what it is like to be alone, truly within your own skull, even in the presence of others. He paints the heartache and the remoteness of it. He romanticizes it with beauty, but it is through this that he gives it meaning and deprives loneliness of its seemingly all-encompassing power.

The inscription below the painting reads:

‘On the day which a whole year has completed since my lady had been born into the life eternal, remembering me of her as I sat alone, I betook myself to draw the resemblance of an Angel upon certain tablets. And while I did this, chancing to turn my head, I perceived that some were standing beside me to whom I should have given courteous welcome and that they were observing what I did; also I learned afterwards that they had been there a while before I perceived them. Perceiving whom, I arose for salutation and said “Another was with me.”’

This painting was an illustration to Dante’s Vita Nuova, which Rossetti had translated in 1848.

There is another reason I love this painting worth mentioning: the mystery of bodycolor. Bodycolor is a term often used to describe when painters add white (opaque) to transparent watercolor. However, the Victorians used to mix a solution created from Isinglass with the paint to heighten the watercolors. I can see bits of white added to this painting, but I’m not exactly sure how he did it and what role the bodycolor played.

I have tried to procure Isinglass to make my own medium in the past. Isinglass is the dried bladder of a Russian Sturgeon, which creates a glue-like solution similar to rabbit skin glue but with less viscosity. At one point, you could not purchase Isisnglass in dried form in the United States (either for political or conservatory reasons) but you can, however, buy Isinglass to clarify beer (this is why some beer is not vegan). From my brief searches it appears Isinglass may be available again. Perhaps I will be able to try it after all!